Bernard Stiegler, through his critical approach to Western intentionality in Réenchanter le monde, perfectly demonstrates that behind the turning point of democratized technology also lies a turning point in human sensibility, characterized by a lack of attention and the transformation of identification processes.

However, far from indulging in a purely negative observation, he shows that what may be a poison, through the reversibility of any pharmakon, can also become a remedy. If technology obliterates attention to the point of preventing any true investment in one’s activity, especially through the industry of mass entertainment, it can also, as a potential means of existence, clear the horizon for some form of reversal. From the passivity implied by technology, where humans are factory workers chained to cybernetic logic, weapons can also emerge to challenge the dominant ideology that determines the use of these technologies.

Before discussing the issues of integrating digital technology into the performing arts, we must first explain why it is necessary. For the past 30 years, control of individuals, bodies and desires, in both the individual and collective memory, has increasingly developed using technology that extends well beyond the simple computer, as Critical Art Ensemble pointed out in their Electronic Civil Disobedience manifesto. From videosurveillance to our own livelihoods, the possibility of digital control has enveloped our very existence. Heidegger was right when he wrote that we have gone from the age of truth of the reduced being to the essence of technique.

For this reason, our metaphorical relationship with technology has gradually become the medium of research itself. Such is the case in performance art with Stelarc’s Third Hand (1), as well as in poetry, where humans are transformed into technology, as in Anne-James Chaton’s Événements 99 (2). The poet is the mechanical membrane articulating all the codes accumulated during the day, linking this list to the current flow of events. Avoiding any dichotomy between proper and improper, Anne-James Chaton is both one who is articulated by a society of commercial codes and one who creates its micro-plans, micro-movements, and disturbances.

In this technical age, performance has transformed itself and, more or less following what William Burroughs already announced in The Electronic Revolution, has questioned various media in order to produce forms of accidents. While it is possible to question the medium and how it relates to control by emphasizing the development and derailment of the relationship between writing and technology through the staged representation of theater, as does Magalie Debazeilles in C2M1 (3), for example, performance questions the resistance of media by doing so within a presentation through the very medium in question. What all these current technologies have in common is coding, algorithmic logic. Code as a processing procedure is itself considered to be an intangible format that allows for infinite reproduction and inalterable memory. Nonetheless, some works question the materiality of this material illusion. They also challenge the implicit ideology of controlling the world, beings and objects in terms of digital potential and its pseudo-dematerialization.

Code then becomes the place where the writing of power is disrupted; it becomes the matter and the stage for these new forms of writing. Démolécularisation—Jean-François and Jérôme Blanquet (4)—tests and produces this disturbance of performing arts technologies. The two performers are on stage, close to each other, lost in electro-analogue interfaces of audio and image processing. By taking pornographic texts, filtering them through voice recognition and little by little introducing the specificities of the active technologies, the artists disrupt the spectacular hyper effect of pornography, radically destroying the audience’s attention and their captive expectations of it in the interference. The image is projected like sound, demolecularizes, dilates, erases what it contained so that the medium appears as nothing more than a medium.

Art of Failure—Nicolas Montgermont and Nicolas Maigret (5)—radicalizes the “bugged” performance genre in 8 silences, which at first seems to be a sound piece, but is actually about writing. Beginning with a silence, a series of 1, little by little, code sent from server to server distorts then destroys itself, until all that is left is a sonorous mass of hyper noise. The computer message is not immaterial, not virtual, it travels and then destroys itself, it obeys interfaces and is altered by them. These performances show that the transparency and immateriality of information is an illusion caused by blindness to technology. As Theodor Adorno wrote regarding the attention given to the medium which favors bugs, the dissonances that scare [the audience] speak to them about their own condition; it’s for this reason alone that they are intolerable (in Philosophy of New Music).

But at the heart of criticism of technical domination is the relationship with the body, the possibility of alienating, identifying and controlling it. The Spanish performer Jaime Del Val (6) highlights this in Anticuerpos, where he questions and criticizes the determination of the body as identified with a genre. As a militant homosexual, he stages himself naked in the street, loaded with cameras and pico-projectors, and neutralizes the definition of the body by projecting details that prevent it from being identified. Much like the first page of Jean-François Lyotard’s Libidinal Economy, the desiring and desired body, in terms of its impulses, is neither male nor female; no longer contained in its envelope, it unfolds into space, its limits and boundaries almost imperceptible. It decharacterizes the perception of the body and repolarizes it through wandering fragments. Jaime Del Val criticizes one of the primary pretensions of our society of control and surveillance: control of the body, and by extension, the possibility of categorizing identities.

Lucille Calmel (7) undermines another illusion of technology: archives. After archiving all her online correspondances from 2000 to 2008 in Identifiant Lucille Calmel, which was realized for the Open festival at Paris Villette in 2011, she created an installation involving the body, real space, online space and motion sensors such as Kinect, to show exactly how this hyper memory of the Internet is fragmented, deformed and can only be revived through a new form of writing, which would itself produce a new archive. In a fine example of différance as defined by Jacques Derrida, she uses bugs and saturated writing to spotlight the indissociability of organic and digital material, then through feedbacks and flashbacks, she shows how digital archiving contracts and materially alters itself. 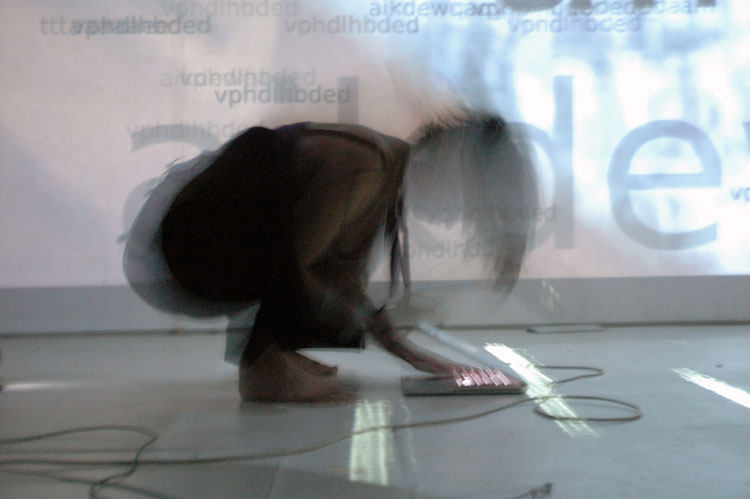 In the same vein, Hortense Gauthier’s hp process (8) critiques the supposed relationship between communication networks and the lisibility of their traces. In her performance Contact, a man and a woman write to each other, but their writing is presented according to an esthetic logic of stacking and on-stage interlacing, as well as live online, redeploying this correspondence in space. Behind the assumed control and transparency of writing, these two performances demonstrate how writing life, live writing, escape the determinations of control by playing with the media in question.

Transforming the ideology of means

It is no longer just a question of spectacularly representing political power. Politics, which has abdicated its power to economics ever since the 20th century, forces us to consider the very means of production. Capitalism is dominated by property, it relates to the world through appropriation, and therefore through substracting possibilities from other people, in real life. At the moment, large computer companies are driven by patents. This ideology of copyright not only takes on an economic dimension, it has become the ideological foundation of our relationship with being, of our personal inventory. Every perspective on being can be patented, displaced from public access to private property.

The performances presented here are all built on other ideological possibilities. Not only are they an explicit criticism of what has happened, they have also transformed their relationship with their means of realization. Whether it’s by reappropriating technologies or developing open source programs and freeware, the above-mentioned artists link what they make to their own practice. How credible can one be, criticizing the very medium in which they choose to operate? It is therefore important to stress that the artworks mentioned here (by Art of Failure, Lucille Calmel, hp process) were all programmed using open source code, itself resulting from the criticism of capitalism and its logic of appropriation: Pure Data created by Miller Puckette.

We can see in many of these performances how criticism is not possible without first understanding the means of domination as well as the development of techniques that rival these means, while offering other forms of relational and economic models. But it should also be noted that few institutions integrate these new practices. Pure Data appears to be a perfect example. Far from being confined to a small community, this programming language has been used by many artists for professional stage performances, workshops and installations.

However, the languages that dominate most computer courses in France are ActionScript linked to Flash, and Max/MSP. Both languages are proprietary and require licences in order to be exploited. Hardly open-source, they are open to a form of commercialized algorithms… which means that we are unconsciously educating students to reproduce this intentionality of copyright and private property, against the collective intelligence of open source. And thus, unconsciously, are we preventing certain types of questioning and critique concerning the ideology of technological media. 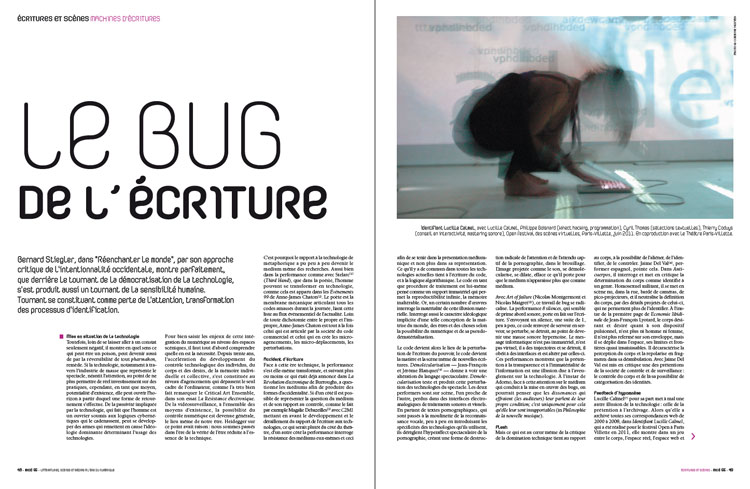