I Would Like To Be Able To Read N. Katherine Hayles

in French, and a few others too…

Katherine Hayles’ books are not translated in French. Neither are those of Jay Bolter, Friedrich Kittler, Mark Hansen and many others. English may be the dominant language of the international scientific community, but in France, foreign theories are traditionally not debated until after their author has been translated. 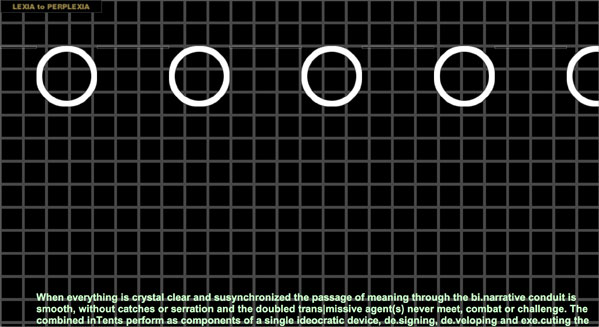 Of course, there are the smugglers, those researchers who in exposing their topics also quote their sources and are unafraid of making explicit points of disagreement. If Katherine Hayles’ books have not yet been translated, it is undoubtedly due to the same obliteration suffered by media theory, and in particular the theories of McLuhan, since the 1970s. We may recall the harsh words of François Châtelet, then a philosopher at the center of knowledge and power circles, regarding the Toronton theorist. In return, how many French thinkers have been more or less forced into physical if not intellectual exile!

Materiality of the artefact can no longer be positioned as a subspecialty within literary studies; it must be central, for without it we have little hope of forging a robust and nuanced account of how literature is changing under the impact of information technologies. This sentence appears in Writing Machines, page 19. This atypical book, with its opinionated views and particular format (designed by Anne Burdick), was published in 2002. As in her other works, such as My Mother was a Computer, Kate Hayles integrates fictitious autobiography into her academic theory. The act of writing is mutating, from the devices on which we write to the way in which we write. It’s all connected. She may not be the only one to say it, but she is one of the rare academics who practices what she theorizes by inscribing it into the materiality of her own texts. Much like McLuhan, who wrote many of his texts like a designer. Writing Machines is one such book that plays with both form and content—fonts, size, layout, everything in this book conveys the computer.

We are talking here about electronic literature, or rather, literary writing from the perspective of the digital environment. This concerns as much hypertext writing (such as Lexia to Perplexia by Talan Memmott)—texts that can only be read with machines, which give them their meaning—as printed novels that play with the material aspects of writing (such as House of Leaves by Mark Danielewski). No doubt more than the digital environment played a role in House of Leaves, however, as there has been a whole tradition of North American novelists—from B.S. Johnson (Alberto Angelo) to today Adam Levin (The Instructions), Douglas Coupland (Microserfs) and Jonathan Safran Foer (Hayles analyzed his novel Extremely Loud and Incredibly Close)—questioning the technology of writing itself. These technotexts, to reprise the concept forged by Hayles, this attention drawn to the materiality of writing, from the letter and its inscription to the “holes” in the text—is it not, as suggested by the researcher Mathieu Duplay, also part of a culture linked to the Pilgrims, who found in this focus a Talmudic approach to text? It’s also no coincidence that electronic literature and online writing have been so successful in the United States, for in order to link meaning to materiality, it also had to be a way of writing, of reading and of sharing the text. 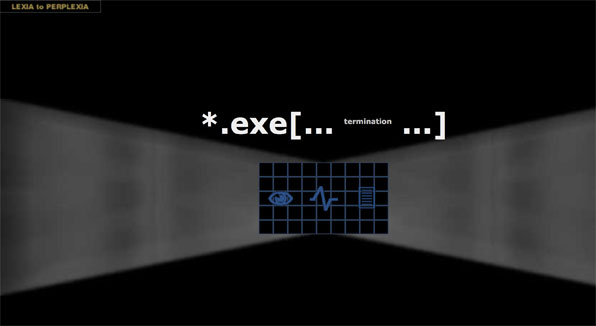 But let’s come back to the author of Writing Machines. The strength of Katherine Hayles’ analyses is that they go beyond the material technical conditions or determinations of the text by questioning their relationship to the body. In 2008 she wrote an article titled “Hyper and Deep Attention: The Generational Divide in Cognitive Modes”, which she also referred to in her great work Electronic Literature. After noticing that she could no longer ask her students to read a whole novel and was limited to studying short stories with them, Hayles called researchers’ attention to that of the readers. Basically, your attention capacity is not the same according to whether you have played video games or read Tolstoy. Hence the necessity to distinguish between deep attention (the capacity to read Tolstoy continuously) and hyper attention (the capacity to understand an algorithm or to multi-task). We are witnessing a generational turning point from one to the other. Far from considering it a form of regression, Hayles sees it as one of many elements demonstrating the mutation of writing forms, including electronic literary hypertext.

Have we then entered a post-human (and by extension, post-humanist) era? We are only living beings, replies Hayles, and we define ourselves in relation to our environment. Technology is neither a mere extension of the body (implying an amputated perception that needs to be remedied), as suggested by McLuhan and his disciples (Jay Bolter, Richard Grusin), nor that by which the body, constructed from a network of discourses, becomes aware of its possibilities (Friedrich Kittler). Technology must also be “incorporated” (by the body) to acquire meaning. In other words, there is no determinism between technology and the body, only a back-and-forth between representations, their meanings and the possibilities of perceiving and acting. As to us (body, writing and technology), we’re mutating. 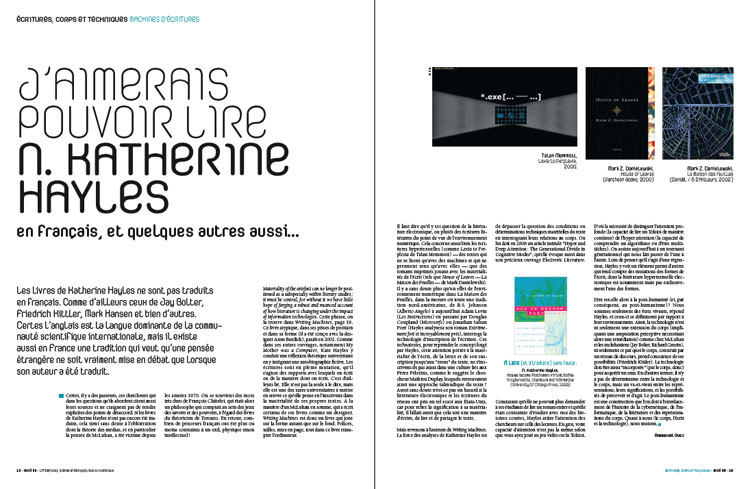