100 hours: the time it took the team at University College London and Mercedes’s Formula 1 department to develop the first prototype of a CPAP device. In less than a month, more than 10,000 certified devices were produced, documented and distributed to 60 hospitals throughout the UK.

In early March, the government launched the Ventilator Challenge inviting corporations and universities to design mechanical ventilators. “What China and Italy were reporting was that once Covid-19 patients are hospitalized, they need respiratory support because they don’t have enough oxygen,” recalls Rebecca Shipley, professor in the department of healthcare engineering at University College London (UCL).

“In order to give the patient more oxygen, the patient needs to be mechanically ventilated by having a tube inserted into their lungs and letting the ventilator breathe for them.” It’s a very invasive process, she explains, which also requires that the patient be completely sedated.

At UCL, the mechanical engineers sprung into action. Innovation Action was established to support and develop projects for low and mid-cost manufacturing, locally across the UK. While benefiting from the support of a well-developed international network, UCL’s mechanical engineering department also works closely with the intensive care services of University College Hospital.

In a feat of logistics, 10,000 devices were delivered to 60 hospitals throughout the UK. Photo: © James Tye / UCL

As feedback from the frontlines indicated that more non-invasive techniques were required, the team turned to Continuous Positive Airway Pressure (CPAP), a breathing aid that connects to the hospital’s oxygen supply network and mixes the oxygen with air in order to provide the patient with a constant pressurized flow of highly oxygenated air. Often used in cases of sleep apnea, CPAP devices are easier to administer by medical staff than mechanical ventilators. The patient can continue to communicate, and the device can be used for up to five weeks. Most importantly, according to Shipley, “CPAP protects 60% of patients from an increase in symptoms and the need for a mechanical ventilator.”

So the team focused on the historical Respironics device developed by Philips. “There’s a lot of data on its clinical use, and it’s a pretty simple device,” says Shipley. Then her UCL colleague Tim Baker, a mechanical engineer and member of Mercedes’s AMG High Performance Powertrains team specialized in building Formula 1 engines, joined the team.

More than 300 people on board

Assisted by Mercedes’s chief engineer, the team began reverse-engineering the CPAP device. It took them just 100 hours to develop the first prototype, with a slight modification: the design is optimized to use the least possible amount of oxygen, a precious resource in times of Covid-19. “We were the right people, with the right expertises, and we all already knew each other,” Shipley comments, explaining their lightning speed. Ten days later, the model was approved by the national Medicines and Healthcare products Regulatory Agency (MHRA) and ready for mass production, with a capacity of 1,000 units per day, at a cost of around £1,000 (1,123€) per unit.

In total, several hundred people were mobilized for this project: 15 at UCL, some 200 in Mercedes factories and around 100 for logistics. Once the certified devices were mass manufactured, approximately 10,000 units were boxed and delivered. “We had no problem with our devices in the hospitals, because the model was already being widely used,” says Shipley. The team developed its own training material, complete with videos. 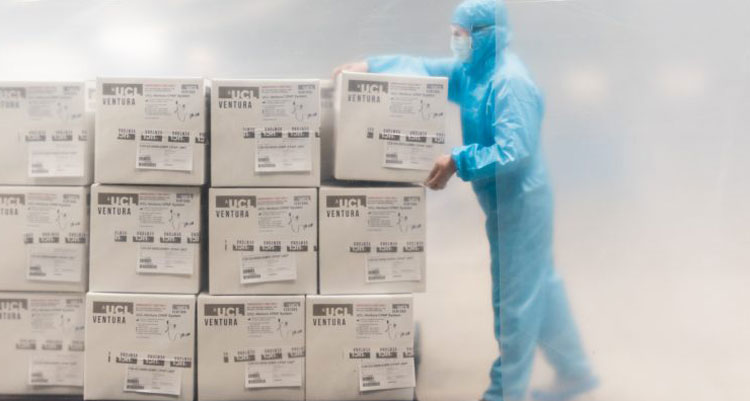 A logistics staff wears a suit to ensure that he does not contaminate the cargo. Photo: © James Tye / UCL

Since the model and documentation were made available in open source, they have been downloaded by more than 1,800 teams from 105 countries. “The idea is to facilitate local manufacturing,” says Shipley, echoing the mission of UCL’s Innovation Action. 50 teams are building their own prototypes in Brazil, Bulgaria, India and Iran. UCL continues to provide technical and logistical support through e-mail, a series of interactive webinars, and a Facebook group to connect teams around the world. “For now the main challenge is to find a supply chain, but we’re working with local organizations,” she says.