Thomas Paine, who is credited with helping to spark the French and American revolutions, is burning a hole in my pocket. Instead of the Queen’s face on British banknotes, I have Thomas Paine on my Lewes Pounds. His face is all over Lewes–this is where he was living at the start of his radical political career in the eighteenth century. 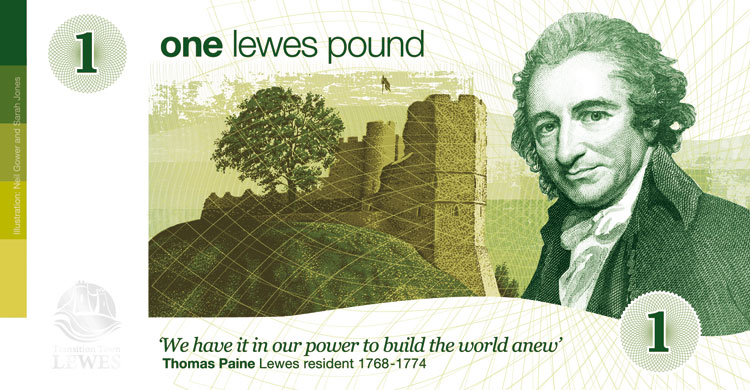 Lewes has always been a revolutionary place. The first limits were put on the powers of an English king after the Battle of Lewes in 1264, when the barons forced Henry III to accept a parliament of nobles. When Bloody Queen Mary martyred 17 Protestants here in 1557 they became a potent anti-establishment symbol that still resonates today. Every year, on the 5th of November, Lewes’ Bonfire Boys and Girls commemorate the 1557 martyrs (and celebrate the foiling of a 1605 Catholic plot to blow up the English Parliament) by burning effigies of the Pope and the government of the day. Lewes’ Bonfire celebrations are so fiery that they can be seen from NASA’s satellites!

Thomas Paine wrote his first political work in Lewes – a treatise about the condition of his co-workers in the excise service–and went on to write Common Sense, the pamphlet which fanned the flames of revolution in America, and Rights of Man, which, in 1792, earned him a seat in the French revolutionary Parliament.

There was a Lewes Pound in Paine’s time. In fact our town had had its own currency between 1789 and 1895 as it pushed back against the outside world. The current Lewes Pound is part of a modern-day revolution, trying to relocalise economics and take back control of our lives from global capitalism.

I use the Lewes Pound for most of my day to day purchases – at the two food markets, in the three alternative food shops, in the cheese shop and the two bakeries, in about half the cafes and pubs, at my hair dresser and the pet food shop, in the hotel my parents stay in, at two shops where I buy clothes, at the CD shop, in my favourite restaurant. You can’t buy a daily newspaper with it for some reason but, if you’re motivated, you can do pretty much everything else.

I pay for my Lewes Pounds in sterling by direct debit from my bank account and then pick up them up once a month at a food shop near my home. If I need more Lewes Pounds, there about five shops in Lewes that dispense them, the equivalent of “cash machines”. 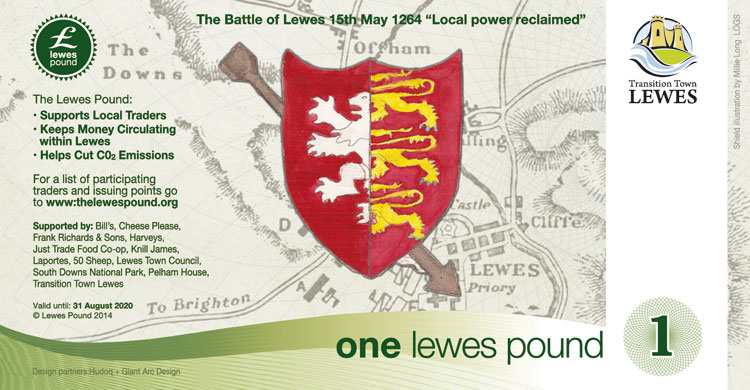 The aim of a local currency is twofold: to celebrate the local community and to enhance local economies. Supermarkets, who provide fewer and worse paid jobs than local shops, extract 95% of the money spent in them. It goes into their tills and straight out of our town. The Lewes Pound can’t be spent anywhere else so it has to circulate locally, thereby facilitating and enhancing exchange between local businesses.

Part of the folklore

The Lewes pound has become part of the folklore of Lewes–like Thomas Paine and the annual Bonfire celebrations. In my opinion this focus on the folkloric has obscured the economic arguments, that local currencies can create extra local economic activity. The businesses who refuse to accept Lewes Pounds, and there are still quite a few of them, either do not understand the economic arguments or say they cannot buy anything with them in Lewes. This is a problem–most shops are not supplied by local businesses in our globalised economic system.

I also have to be clear that I am one of a very small group of people who religiously use the Lewes Pound–most people are happy to see it exists but prefer to stick with their pounds sterling, which work in London and Brighton. In some shops I am the only customer who uses Lewes Pounds! But these are experimental days. The main thing is to show how a local currency can work. If, or maybe when, the financial system collapses under the weight of its own contradictions, Lewes will be ready. As I said before, we are a revolutionary lot in Lewes!

Alexis Rowell is a Transitioner and eco activist. He is currently a member of Transition Town Lewes in East Sussex and act as managing Editor of Transition Free Press.
http://thelewespound.org/