Keep it moving, there’s everything to see and nothing to sell

With her ironic pieces, French artist Albertine Meunier forces us to see things from a different angle, introducing a grain of sand into the well-oiled gears of our digital world, beginning with Google. Within the results of the ubiquitous search engine, she re-categorized Marcel Duchamp’s ready-mades as belonging to the Net Art period (The Innards of L.H.O., 2013-2014)—a very dadaist update, which she explains below.

Since July 27, 2013, Albertine Meunier has been hacking Google with a “Ready Made Hack”, The Innards of L.H.O. Anyone who searches one of Marcel Duchamp’s artworks will find that it belongs to the “Net Art” period. Duchamp may be the father of contemporary art, but he never lived to see the Internet! Thanks to this semantic hack of Google’s Knowledge Graph, Duchamp’s best-known works—Fountain (the infamous urinal), Bicycle Wheel, Nude Descending a Staircase, Bottle Rack—are all time-stamped as Net Art… without a word of protest so far from the online giant.

How do you explain why Google hasn’t done anything to stop your Ready Made Hack on Duchamp for the past year now?
I appear very openly on the history list of changes, so they must know! It has also been in the media—I promoted The Innards of L.H.O. during FIAC, the contemporary art show in Paris in 2013, before summer I launched a crowdfunding campaign to publish a book documenting this performance, which has just been released and is visible all over the place. Maybe Google is leaving it as a Duchamp-style transformation? (laughs) A number of people said to me: “Why did you do it on Duchamp? Nobody’s interested in him. But if you did it on a politician, everyone would be talking about it.” That’s exactly my point, that Google is more interested in LOL culture than in art, or at least in this symbol of 20th century art that is Duchamp.

Does confronting Google with Duchamp-style art amount to demonstrating that the all-powerful giant isn’t all that?
Google claims to carry all of human knowledge, but it isn’t vigilant! It opened a cultural institute in France for its good conscience, but it doesn’t know the first thing about art! My little hack shows its patent ignorance, while highlighting its pretentious ambitions. But when you’re pretentious, you need to live up to the situation! I also wanted to show that things in the digital world are not necessarily as they seem, assumed and acceptable, impossible to criticize. You can consider the Knowledge Graph from a critical viewpoint and overthrow the search engine’s authority figure.

Especially if the authority figure “devalues” Duchamp’s importance. Is it also a criticism of the art market?
In 2009, I took an interest in the art market, with Mona LHO, an Internet-connected ready-made par excellence. I found a nice ashtray and cigarette holder with a picture of the Mona Lisa, I connected it to the AMCI (Art Market Confidence Index), which ranges from de –40 to +40. This value is displayed on the base of Mona LHO, to show that you can take any object and connect it (like Duchamp) to make a connected ready-made. It’s also a wink at this value that is supposed to indicate a healthy market, placed in the ashtray.

Is it a criticism of speculation in art?
I’ve always seen the index as a positive value, never negative. Isn’t it strange that this index never dips below zero? 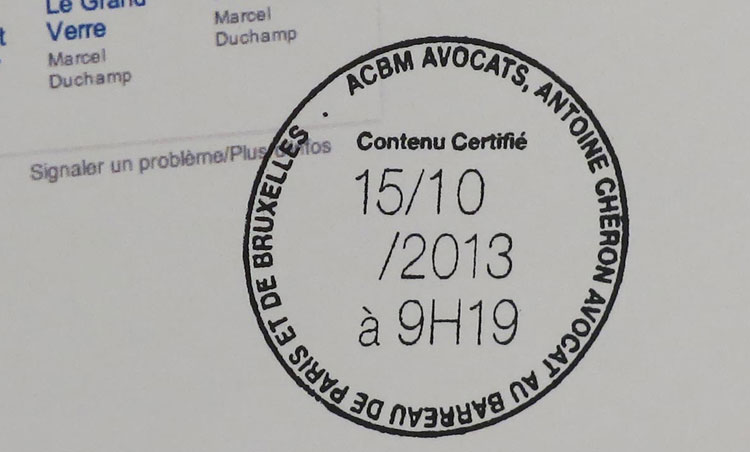 Is the hidden message “Don’t get attached to mercantile contingencies”?
It’s good to buy artworks, but buying on the art market is useless! I buy stuff as a collector because I like art, but market speculation kills art—the rating has no meaning, it’s even counter-productive for people who want to collect, as it distances you from the art. Many pieces become inacessible, especially among contemporary artists. Personally, I don’t buy art to invest my money…

Is it a criticism of money?
Yes, of the speculative aspect of money! Because this object that I found at a flea market in Montrouge is a ready-made Mona Lisa, I didn’t do anything to the object itself. So is it art? To me it’s much more than a Russian doll, a bouncing object. It’s one of the objects that I don’t want to sell!

Why?
To me, it has no value, or rather, it’s priceless! For me, its value is so high that I will keep it until I die. As I don’t live off the sale of my artworks [Albertine is an R&D engineer in a big company], I don’t need to sell them. So I came up with another system, confiding them to people, like my life assets. I entrust them to people who will commit to taking care of them.

So you exclude yourself from the market?
In terms of speculation, yes. An artist’s true freedom is being independent of the market, not having to produce only things that will sell. The current gallery model is obsolete. It used to be that a gallery would take an artist under its wing and take care of his or her production, and the artist would enjoy a sort of universal income. Today it’s hard to maintain a certain amount of freedom, as the artworks need to be somewhere, not in boxes!

And the people to whom you choose to confide your artistic life assets are cherry-picked by you?
Yes, isn’t it a luxury? (laughs) The point is that it circulates. No matter if it sells or not!

Albertine Meunier has been practicing so-called digital art since 1998 and uses the Internet as raw material. She defines herself as a Net artist, which is not necessarily her artistic net worth. 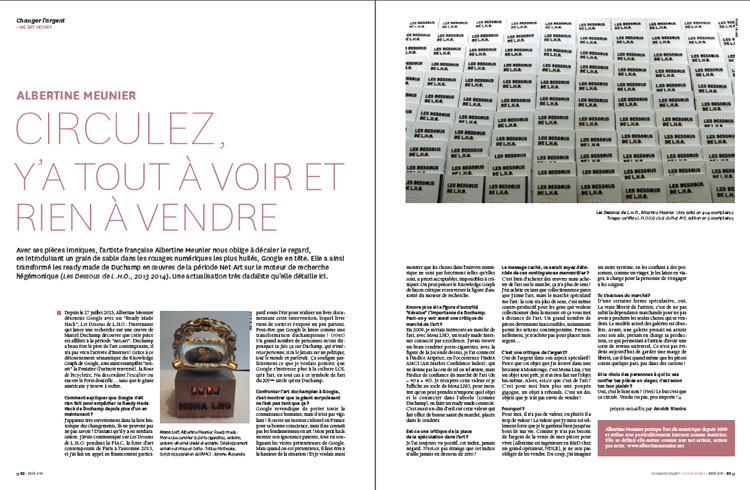