literature in all its media

If machines awaken in the imagination an “uncanny strangeness” (Unheimlichkeit (1)), they also constitute a material environment that interferes with the arts. To what extent does the development of technology condition creative practices? 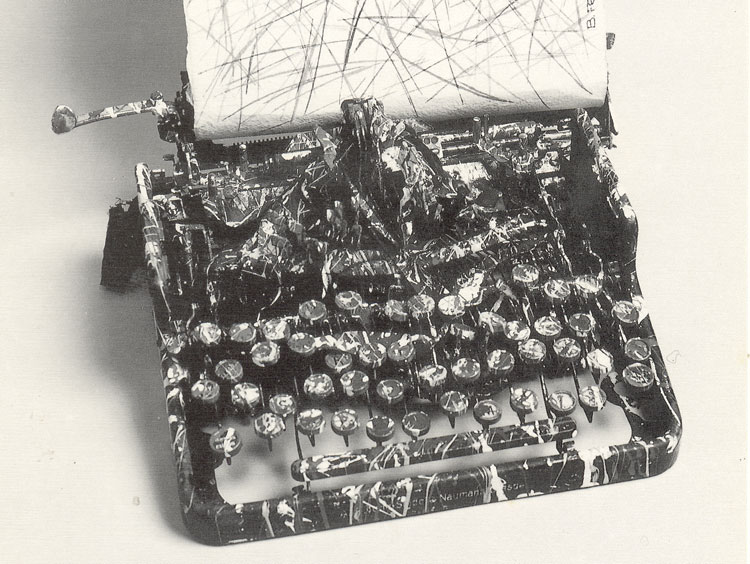 There is no doubt that artists have always had a choice in their medium of expression, and that there is only voluntary technological art and literature (2). However, “mediological mutations”—which Jean-Pierre Bobillot defines as a technological innovation reinforced by a symbolic innovation (3)—are radically changing the conditions for producing and distributing works. But whereas visual and sound arts, for which the medium is essential, have had no difficulty admitting the role of technology in their creative process, literature remains surrounded by a strange aura of idealism. Even if it is generally accepted today that the transition to the printing press or mass media has considerably marked writing practices, literary studies have hardly been preoccupied with the relationship between literature and its immediate technological environment. The use of “writing machines” is regarded, at best, as self-evident, at worst, as a guiltily materialistic indifference toward the intellectual, if not spiritual, nature of literary art.

This denial of the influence of technological transformations on the modalities of writing does, however, reveal two distinct movements, which are also two attitudes: on one hand, these new technologies are being gradually integrated (when a medium becomes dominant, its common usage makes technology less of an issue); on the other, these same innovations (and their effects) are being questioned. The recent development of digital writing shows that it is possible for these two movements to coexist. If the first, widespread, takes into account extra-literary phenomena (technological development, accessibility, ergonomics…), the second, founded on experimentation with new devices and the invention of adequate writing procedures, manifests the attention that literary creation has always paid to the development of these technologies.

From multiplying media to media-literature

Full awareness that the use of technology could affect literary practices comes late, and is linked to reproduction and communication technologies. A growing interest for these media emerges in the last third of the 19th century, as an important, if poorly studied, dimension of European symbolism. Books are questioned as objects, as in Mallarmé’s exemplary Un coup de dés jamais n’abolira le hasard (“A roll of the dice will never abolish chance”) in 1897. At the same time, the material conditions for distributing writing evolve (invention of the typewriter in 1868, linotype in 1885), just as writers encounter new media (photography, telephone, phonograph), even if their use is not widespread until the early 20th century. Thereafter, books are clearly designated as outdated objects, or at least to be completely reconstructed (along with a dense contemporary analysis of typography). From poster to record to radio, literature explores every medium of modernity.

As literary media diversify, a conscious sign that “everything can become a medium” (4), they attract more attention to their function as media (particularly in the context of communications criticism, which has become dominant since the mid 20th century). But contrary to digital literature, which developed rich theories on the changes brought about by the medium in terms of both creation and reception, reports on the preceding innovations are rare. Those that do exist are shallow, focusing on the way the machine is explored, exploited for what it is—the same relationship that exists between concrete poetry and the typewriter, or between sound poetry and magnetic tapes and the microphone. Here, the machine is not limited to an auxiliary function but makes possible a specific work, which in turn renews the relationship between the author and the reader. 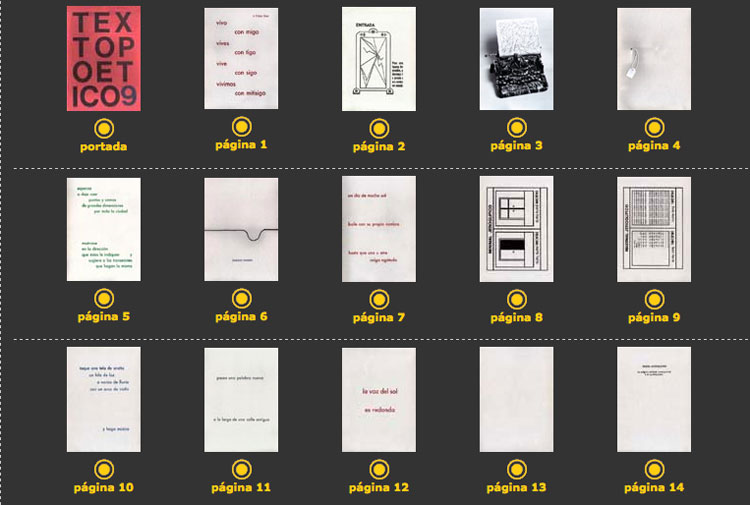 New perceptions of “me, here, now”

Besides its capacity to invest in the medium itself, the changing mediasphere conditions new modalities of perception. Modern communication devices transform our relationship with time and space, sharpening our awareness of the synchrony of events and giving the illusion of ubiquity. This accelerated experience of the modern world finds a parallel in the increasingly instant nature of machine-based writing. According to McLuhan, the coincidence of text production and reproduction is the main advantage of the typewriter (5), just as “real-time processing” is one of the more fruitful uses of computers.

This immediacy, which has also led to the gradual disappearance of crossed-out text (industrially produced paper favors it, while typewriters make it complex and computers erase it), is paradoxically accompanied by a distancing effect. The common characteristic of these communicating machines, which both fascinate and perturb the latter part of the 19th century, is that they lead to depersonalization, or literally, disembodiment. The typewriter obliterates the traces of the handwritten gesture, just as the telephone and the phonograph detach the voice from the body, and photography and film separate one’s appearance from the being that animates it—a phenomenon that recalls the immobile projection of logging in to cyberspace. In the act of writing itself, this dematerialization is also expressed by the growing distance between the artist and the artwork, which Abraham Moles analyzes, in the case of computers, as an “objectification” of language (6).

The paradox is reversed, however, when the double effects of dissociation and exteriorization imposed by the machine bring the body back. Just as the plume or the pen is grasped like a tool and an extension that adapts to the body (the plume fits the hand), typewriting assumes an adaptation of the body (a constraint) that involves a rhythm, a “gesticulation” (7). The rising practice of sound in literature and, to a greater extent, in performance, confirms that machines not only amplify but also reveal the body by manifesting its interiority (François Dufrêne, Henri Chopin). The return of the body through the machine and the emphasis on immediacy coincide with a new way of considering an artistic act, not as that which produces beauty, but as that which, like machines, transforms the world. Hence the more valorized definition of art as “intervention” or “action”, which is a common trait among avant-garde practices.

In this rapid overview, we must finally consider the consequences of technology on writing procedures. Many studies attest to the stylistic changes that have accompanied the changing technosphere. Friedrich Kittler reports the claims of several writers who, because of the typewriter, have gone “from rhetoric to telegraphic style” (8). For ergonomic reasons, as much as the intent to translate modern modes of perception or material effects related to the machine, a “technological style” has developed, focused on mechanical procedures. In response to the efficiency, absence of emotion and rhythm of the machine, we find concision, objectivity or a taste for permutation in literature. Language is transformed and accelerated—we “abolish syntax” (9), prioritize the word, even the letter, as this elementary link of language; we give precedence to verbal material, which echoes the new materiality of the act of writing.

In addition to this “translation” of mechanics, some writers question their relationship with these new media and develop new literary forms, voluntarily dependent on their chosen format. But while the historical avant-garde of 1920-1930 live it as a euphoric fusion, the neo-avant-garde of 1950-1970 seem to consider the relationship between the artist and the medium as a power struggle. The two attitudes are opposed, even if the machine always appears as a constraint. On one side are those who use the tool according to its potential—concrete poetry adopts the minimalist aspect of the impersonality and stark visual style of the typewriter, while in the audio field, literature integrates the sounds that can be recorded and fixed. On the other side are those who intervene on the machine in order to thwart its use—interventions on magnetic tapes and sound collages blur audibility, while delinearized, even illegible texts produced by “typist-poets” mirror the useless machines of the dadists and the self-destructive machines of Jean Tinguely. In both cases, the machine is reappropriated to produce art and becomes an esthetic object in itself. In this sense, even as literature develops under the constraints of technology, it offers in exchange new uses that invite reflection.

If McLuhan’s affirmation that “the medium is the message” may seem extreme, at least this research invites us to recognize the medium in the production of meaning. In the face of “passive” literature, which requires a tool for mass production, “media-literature” (10) emerges, going beyond technological concerns to focus on the medium’s impact in the creative process as well as its use to challenge academicism and social attitudes regarding esthetics. 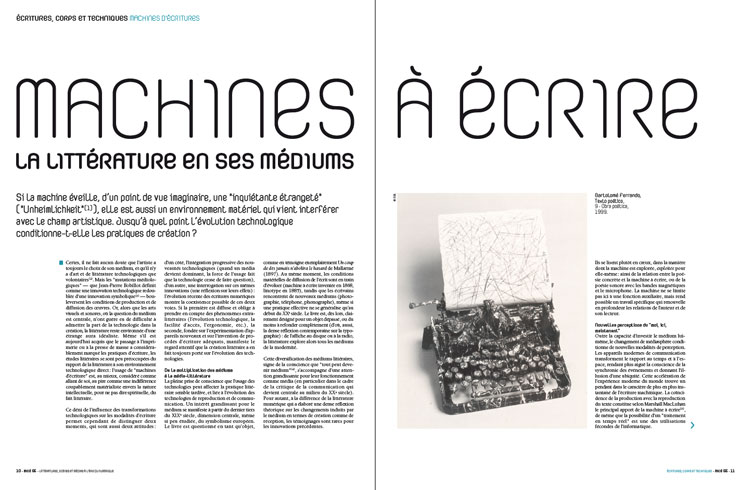