the dream life of digital letters

This will kill that. Such were the words used by a distraught priest in Victor Hugo’s Notre-Dame de Paris to express his anxiety over the fact that books would one day replace religious architecture. These days, there are fears that “this”—digital media—will lead to not only the disappearance of “that”—books—but above all the degeneration of certain forms of expression, and more specifically, of literature. 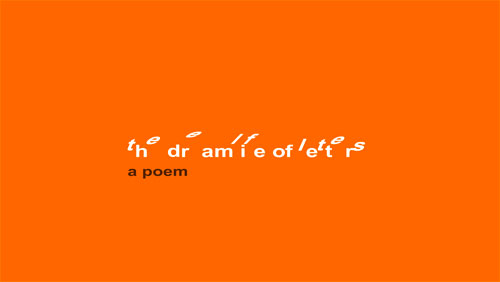 At a time when tablets are still transforming our reading habits, it seems particularly important to question the existing forms and potential of digital literature. I will not, however, establish any type of competitive relationship. Certain forms of literature continue to be writtern and read on paper; others have begun (ever since Theo Lutz’ Stochastische Texte in 1959) to experiment with the new dimensions brought to text by digital media. I will review of a few of these dimensions, with regard to their poetic potential. Literature written for digital media first took off in the 1980s and ’90s with the appearance of magazines (such as alire) and the creation of authors’ associations (such as the Electronic Literature Organization). The last few years have seen a growing number of festivals and anthologies.

Poetic machines before the letter

While digitally native, this literature belongs to the avant-garde tradition of trangressing the frame of the paper page with hypertexts and randomness “before the letter”. As early as the 1950s, the authors of OuLiPo (Ouvroir de Littérature Potentielle) had cut up poems into strips to show the importance of randomness in the creative process (see Raymond Queneau’s Hundred Thousand Billion Poems) and were among the first to consider computers as “automatic generators” of poetic texts. In terms of narration, the first digital experiments were often inspired by the tradition of the Nouveau Roman. Hypertext seemed like the dream machine to allow the text to expand in a complex web of interlaced temporalities and causalities. Today, the paradigms of the “poetic machine” and hypertext-fragmentation are still relevant; I would even say that we are only beginning to know how to “read” hypertext. Nonetheless, the arrival of hypermedia has also given rise to emerging literary forms that explore the borders between literature and visual arts. 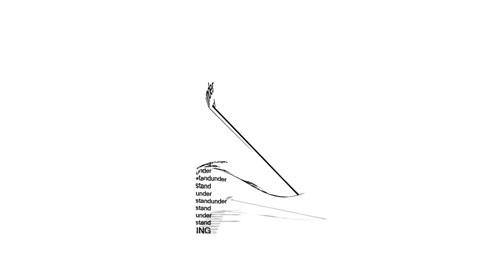 Certain works experiment with moving words and letters, which more or less act upon the meaning of the text. In Alison Clifford’s The Sweet Old Etcetera (1), the word “grasshoppers” hops onto the screen, and the double “o” of the word “look” appear and disappear like blinking eyes. I’ll call this quasi imitative relationship between text and movement “cine-gram” (in reference to the calligram). In other cases, the movement not only imitates the meaning of the text, it opens it up to new meanings, in a non-illustrative manner that recalls figures of speech such as metaphor. These I would call “cine-tropes”. For example, in David Jhave Johnston’s poem Stand Under (2), the words “under” and “stand” are unbearably stretched out and then compressed. Both inseparable and incompatible, the relationships between text and movement seem, at least in part, to escape interpretation. What remains then between text and movement is an impression of (de-)coherency: a free space in which I would situate the poetic potential of animated text.

Other spaces of (de-)coherency have emerged from the relationship between texts and interactive gestures. In Philippe Bootz’ Le Rabot poète (3), the reader is invited to literally “plane” the surface of a poem using the cursor as a tool. This relationship between the gesture and “erased” effect visible on the screen could seem purely imitative, and thus constitute a “kine-gram” (again in reference to the calligram). However, certain words have a surprising relationship with the gesture—for example, the reader is invited to “plane” the words “you part these waters”, even though water is not a planable material. Does this (de-)coherency between gesture and text escape all understanding? Perhaps not. Contrary to what online scratch games would have us believe, digital matter never gives in to our interactions. Thus, Le Rabot poète seems to warn the reader that his gesture is effectively futile. This impression of futility is further reinforced by the fact that the poem continues in the same way if the reader stops planing. This is how digital literature can sometimes be impertinent, resistant, even political—far from inviting the reader to play a frivolous word game, the interface challenges the reader’s reflexes and expectations, prompting him to question the “givens” of digital media. This questioning is all the more salutary when digital literature is occasionally accused of collaborating with the economic world, already using its machines and creative tools. 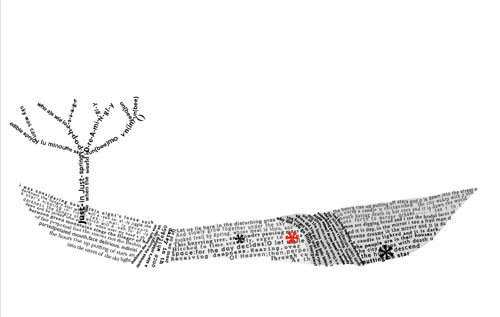 A third characteristic of digital literature is its multimedia nature. I won’t go into the complex relationships between text, image, sound and video in these “e-forms”, but I will cite an emblematic example that shows both the potential and the possible risks for text. In Reiner Strasser’s In the white darkness (4), the reader activates images and fragments of text through a graphical interface. The word “remember” emerges, for instance. The letters are filled with images; “m” contains a child’s face. In a brief note, the author explains that he observed the development of Alzheimer’s disease over a period of several weeks. Based on that experience, he created this interactive visual poem, which sensitizes people to the fragmentation of memory, the slowness and despair of (de-)coherency, but also to the fading softness of the last memories. The result is a magma in which the text inexorably dissolves into graphical material, even if it remains present in the computer program of the work.

This relationship between the visible text and the computer program is sometimes difficult to apprehend. Every work of digital literature depends on a program, even if the reader doesn’t see it in action on the screen. Because of machines’ ever-increasing processing power, the program is not necessarily executed in the same way on every computer, making digital literature fundamentally fragile, even ephemeral. Some 20-minute animations created in the 1980s are now almost unreadable as they speed across the screen in a matter of seconds. It’s a problem for conservation, but also a challenge for the authors. Some works are thus designed to slowly “decompose” on the screen. It’s this ephemeral nature that I’m experimenting with in my own pieces (Tramway (5)), by studying this increasing (de-)coherency between visible text and programming in the context of memory. This personal note ends my brief survey of experiments in digital literature. Instead of concluding, I invite the reader to take possession of these free spaces, between empty and meaningful, where digital literature’s poetic potential awakens a new “dream life of letters”, always bordering on disappearance. 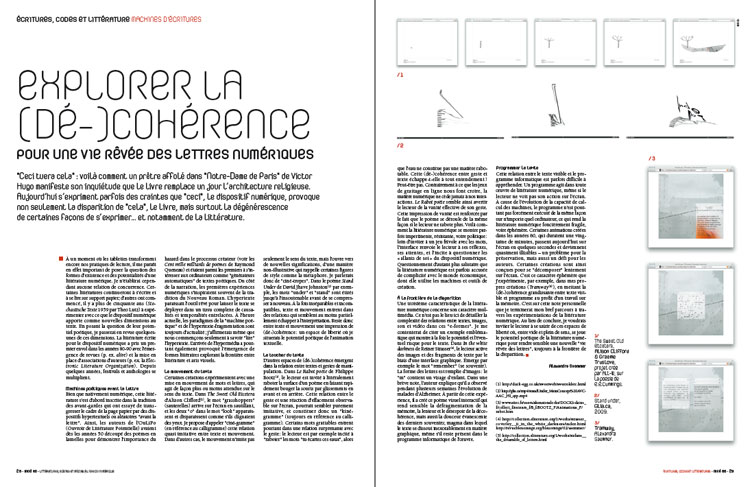