Reinventing the past in terms of the future, placed under the specter of the great Philip K. Dick, the most disjointed science-fiction and fantasy uchronias shatter the linear timeline of literary narratives. Now, they link to the samples and hypertexts of the digital age… 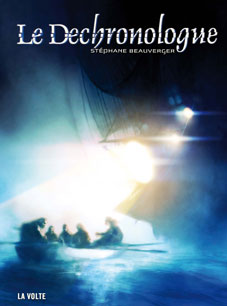 1648. Here we are in the pirate world of Stéphane Beauverger’s Le Déchronologue (1). François Le Vasseur, a former privateer turned governor of Turtle Island, is literally obsessed by these maravillas yanked from the future: true-to-nature geographic maps, turntables, electric lamps, radio transmitters and other tubes of cinchona. Henri Villon, a freebooter whose ship expels from its own century the temporal interferences of fleets from other eras, offers the autocrat a poisoned gift: a book from future times to bear witness to the destiny of the illustrious characters who will make Caribbean history and where we duly find François Le Vasseur, governor of Tortuga since 1640, along with the year, place, day and manner of his death. Fatal consequence: after a night of mental suffering faced with the inevitable announcement by ink on paper, the candidate shoots himself in the head, finally relieved to have invented a different demise from the one history had promised him.

Fallen into the past, the history book of the buccaneers changes the character’s present, which should in return change history and therefore mess up this book of the future bearing (false) witness to Le Vasseur’s past. Like the other maravillas, this rare object is at once a sample and a virus. It’s a specimen from the future, where the sample is first a theoretically well-determined ersatz product from the past, used in the present for creative means. And it’s a virus digging a hole in time. In fact, it shatters the unshakeable logic of its timeline as in another book within the book—in Philip K. Dick’s The Man in the High Castle (2), a uchronia where World War II has been won by Germany and Japan, an illicitly distributed book affirms that the conflict has been won by the Allies: The Grasshopper Lies Heavy.

The sequential logic is broken by theoretically impossible intrusions from a time to come in the today of the book, and even a yesterday reinterpreted by the author, for example the breakthrough of Alexander the Great, imagined in 1640 in the oceans of Le Déchronologue. In an elegant find, Stéphane Beauverger’s printed book begins from chapter I (1640) to chapter XVI (1646), then goes back down from XX (1649) to IX (1641). In other words, its “linear” flow is “delinearized”. It’s possible to read Le Déchronologue while disregarding the timeline, according to the sequential logic suggested by the author, or on the contrary in the classic way, from chapter I to XXV, but while building one’s own narrative flow beyond the order of the pages. 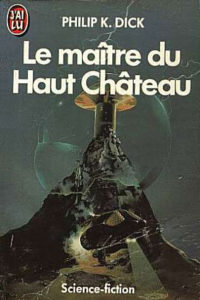 In a way, the patchworked YouTube collage matches that scene in the second novel of Michael Moorcock’s trilogy The Dancers at the End of Time, where a dandy from the distant future and musket-toting extraterrestrials raise havoc in London, in the Café Royal frequented by H.G. Wells at the end of the 19th century. As B-literature for fantasy or science-fiction series, the uchronia doesn’t try to revolutionize the form of the printed text itself in the now legendary manner of a Raymond Queneau or experimentations by Oulipo. Of course, we do find nice ideas, like these excerpts of more or less invented novels which seem to live their own lives in bold type at the heart of Jasper Fforde’s The Eyre Affair (4). But the double-page blank that suddenly interrupts the original edition of Charlotte Brontë’s novel Jane Eyre, following an offense to fiction, is staged, not at the heart of the book… but on Jasper Fforde’s website!

In short, it’s not so much through their literary form as the way their plots turn our chronological reality upside down and elaborate a circular, reversible time that uchronias anticipate the multimedia hypertext writing of today. As such, the series that begin with The Eyre Affair in 2001, crazy remix of Britain in 1985 featuring time travel, cloned dodos and Wales as a socialist republic, is particularly remarkable. A “literary detective” employed by the “Jurifiction”, Jasper Fforde’s heroine Thursday Next operates within novels, while the characters in these same novels intervene in her own “reality”—the most infinite change in the original manuscript of a work automatically affects all existing copies…

Through this approach in perspective, similar to that of certain texts by Borgès or of short stories such as Philip K. Dick’s The World She Wanted and Exhibit Piece (5), uchronias transform fictitious works set within them into true virtual realities, in which it is possible to act very concretely. Finally, Jasper Fforde’s “living” novels anticipate the concept of an unfinished work, and in particular the e-book dreamed by Frédéric Kaplan, which changes constantly according to notes, Web links and other exchanges between readers and authors—in other words, reading and writing by many hands, which will never write the words “The end”. 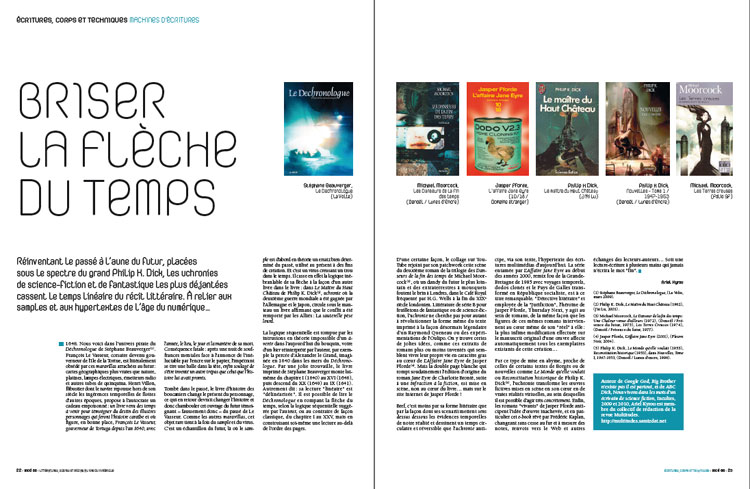