The Work Of Annie Abrahams 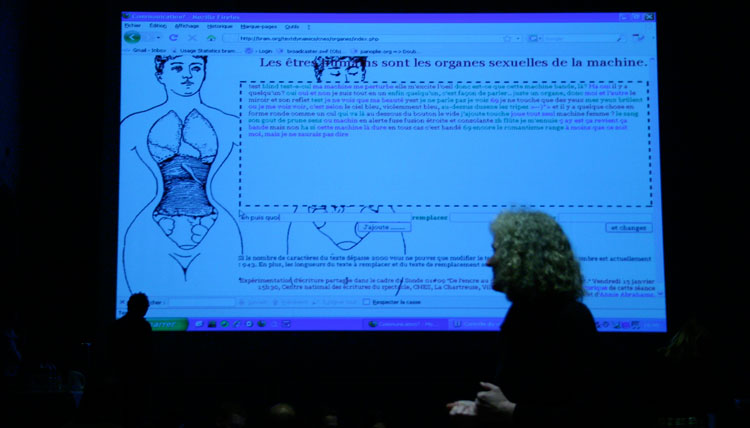 The live audience observed a strange phenomenon: the act of writing in which they were participating had become a combat. The final text was destined to be read. That meant that, in order to be read, each participant had to elbow their way through, by modifying and deleting the words of others, by writing faster and longer than the others, by seizing the kairos, that opportune moment which leads the winner to victory.

As is often the case, Annie Abrahams’ devices and protocols make people write like crazy. “Make” them write, because for the past few years, her writing machines don’t write, they make people write. Annie Abrahams has been a Net artist for 15 years. Her digital literary works and online art (Being Human, 1997-2007) already spoke about the painful relationship between the body and the machine. Since 2007, the artist has been doing online performances that involve other people’s faces. In order to question loneliness.

It’s not obvious that interconnected machines have eliminated loneliness. On the contrary. Human relationships are built on one’s attentiveness to another, to their gestures, their rhythms, their face, and not on what they want to tell or show us through the intermediary of the Internet.

With extremely precise and repeated protocols, involving very diverse personalities, Annie Abrahams’ online performances, such as The Big Kiss (2007), Huis Clos/No Exit (2009) and Angry Women (2011), refuse to flatter the utopias of a society that is pacified and content with mere machine play. Annie Abrahams begins at the beginning, that is, with intersubjective relationships—the affects and affections, as Spinoza would say. In short, she starts with ethics to better meet politics.