is there anyone in the machine?

The theorist Friedrich Kittler, who died last October, is still relatively unknown in France. His originality was to create a dialogue between the ideas of Foucault and Lacan and media theory, especially McLuhan. His own theory postulates that today, writing is linked to computer code—code which has become increasingly user-unfriendly. 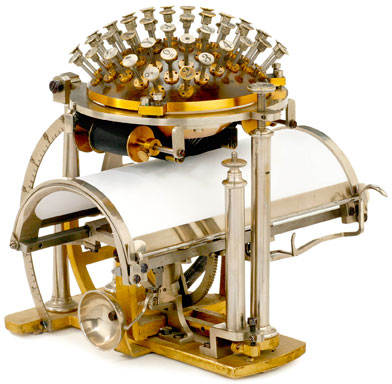 In an interview, the Germanist and media theorist Friedrich Kittler stated: I can’t understand why people only learn how to read and write the 26 letters of the alphabet. They should at least add the 10 digits, the integrals and the sinuses (…). They should also master two programming languages, in order to possess what, at the moment, constitutes culture. Elsewhere, he denounced the computer industry for wanting to rob users of their grip on the machine.

The question has haunted the debate between technophiles and technophobes: Are humans using machines to produce meaning or is it the machines that are producing humans and their productions? In a word, who are the masters and the slaves of our digital century, where computers have become the ubiquitous managers of our practical and theoretical activities? This question may still be relevant in media theory, but not so much in reality, considering that humans have never mastered their own meaningful productions, in the sense that they would have been fully aware and autonomous. This is the starting point for Friedrich Kittler.

What is his dominant thesis? That the writing system of a period, i.e. the techniques used by a culture to record, transmit and treat information, determines what we are, what we think and how we see ourselves. But while we may speak of Kittler’s technical determinism, his theories were more inspired by Foucault than by Marx. Like his French predecessor, who wrote in The Discourse on Language: If there are things that are said, do not ask for an immediate reason of the things that have been said or of the people who have said them; first consider the system of discourse, its possibilities and impossibilities of enunciation, Kittler is dedicated to shining a light on the conditions that would make possible different types of discourse allowing successive productions, by period, (from the flight of birds among the Romans to the symptoms of neurosis) to become meaningful to their contemporaries. In any given period, and independently of the speakers’ intentions, not everything can be said, or heard. But where Foucault is exclusively interested in the orders of discourse that determine language production, Kittler expands his field of investigation to the technical environment as a whole.

Writing was the first technical system used to record, transmit and treat information. For a while, it was the only channel for memory and the constitution of the world. Its monopoly was challenged in the early 20th century by the phonograph, photography and cinema. Beyond the fact that they offered a new plurality of representations of reality, these new media caused a break—contrary to writing, which reproduced reality symbolically, their mode of representation consisted of recording the physical effects of reality, thus preserving the traces of the body or event. In Grammophon, Film, Typewriter, Kittler analyzes this in Salomo Friedlaender’s story Goethe parle dans le phonographe (1916), which imagines the possibility of hearing Goethe’s voice again by recording the vibrations of his speech, among which some, bouncing from object to object, still persist today, albeit much weaker. Recorded sound, like photography, was thus mechanical proof of the object’s existence. Writing produces meaning through symbols, the phonograph and photography through recording.

A new system for producing meaning in the 20th century.

The new media acted on the education system that had instituted this writing system of 1800, putting an end to what could be called the rule of meaning. Up until 1800, it was the mother’s voice murmuring gentle words into her children’s ears that taught them how to speak. Between these syllables and the first words pronounced by the children, continuity was established from an instance of meaning. In the same way that the syllable “ma” was born from maternal love, little by little transforming into the word “mom”, speech came about naturally from syllables establishing the affectionate mother-child relationship from the very first meaningful words. 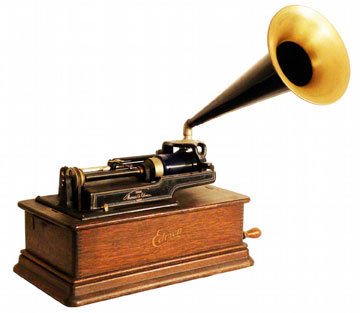 But the rule of new media has changed the modalities of speech transmission. Now, just as the phonograph records the sounds emitted from the vocal cords before any ordering of signs or meaning whatsoever (vibrations are frequencies that escape our perception of movement and cannot be transcribed or written), learning language consists of processing data, itself devoid of meaning. Learning to talk and write has become a process of learning meaningless syllables, which are combined to form words and sentences. The syllable “ma” has lost its emotional value to become little more than the result of a systematic production of sounds based on the letters of the alphabet (ma-me-mi-mo-mu…). Children no longer memorize through a natural and continuous process of language spoken by their mothers, they acquire language through a series of syllables with no meaning. The writing system of 1900 rolls the dice with discrete units ordered in series. This is what media are in the modern sense of the term: meaningless building blocks, designed by random generators, selected to form arrays.

The resulting discourses are no longer the same. According to Kittler, we must radicalize Walter Benjamin’s idea that cinema produces dispersion, which opposes bourgeois concentration. This is much more general and systematic. Film has no primary role among the media that are revolutionizing art and literature. All are provoking a flight of ideas in the psychiatric sense. In Das Aufschreibesystem, Kittler relates the experimentations of the Viennese psychiatrist Stransky (1905). The subjects of his experiments, including both colleagues and patients, had to speak into the tube of the phonograph for one minute (if possible quickly and profusely). He observed the same behavior among all of them: saying sentences with no regard to meaning. The phonograph produced provocative responses, which no self-respecting civil servant or educator would dare to write. Individuals who must talk or read faster than they can think necessarily wage their own little war against discipline.

This new paradigm is still affecting the production of meaning today. Since 1900, the instance of producing discourse that transforms inarticulate babbling into meaning has been replaced by a random process of recording and combination.

A new role in the system for the digital revolution?

Computers have only served to accomplish the meaningless aspect of discrete elements which combine to produce meaningful statements. With binary code, the flow of acoustic, optical and written data, formerly differentiated and autonomous, are now coded by the same basic elements and transmitted by the same fiber optics. The monopoly of writing has been succeeded by the monopoly of numbers, while the link to reality introduced by the phonograph and photography has been broken— reality is no longer reproduced by recording, but by coding. Sounds and images, voices and texts are nothing more than interfaces created by a series of digits. The differences between media are only superficial.

Logically, the technical level of producing meaning (the code) is not the semantical level of the existence of meaning. Kittler emphasizes the gap between the code, becoming increasingly inaccessible to the users, and the interfaces, and points out the efforts of the computer industry to restrict consumer access to the machine, transforming the computer into a ready-to-use tool, which it is not. Thus, the possibilities of intervening on the machine and modifying its technical parameters are limited, while users’ desire to do so is channeled by immediate and easy-to-use interfaces.

If humans have never mastered their meaningful productions, as stated earlier, if today we are only determined by our own binary system of writing, the digital era leads us to ask ourselves if there is an author in the machine, that is, if and how users can overcome these digital determinations to reappropriate a meaningful intention. 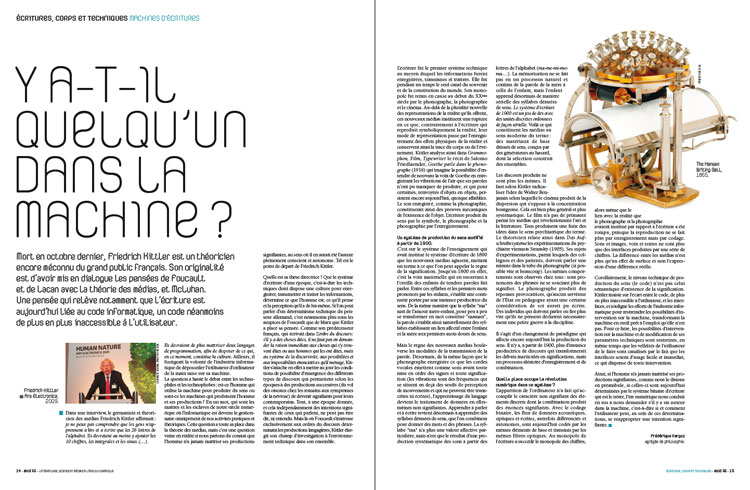