between technology and art

On the occasion of the centenary of Marshall McLuhan (1911-1980)—Canadian philosopher, sociologist, professor of English literature and communication theorist—among many other events which have taken place in 2011 around the world (except in France), Alphabetville (directed by Colette Tron), along with Ecole Supérieure d’Art d’Aix-en-Provence (J.P Ponthot, J.Cristofol), ZINC (E.Verges), Leonardo/Olats and Iméra (R.Malina), have organized three days dedicated to his thoughts and writings.

McLuhan was the man behind the formula the medium is the message and the notion of “the global village”; he was an analyst of media (or technology) and of the cultural and anthropological mutations they induce, from print to electronics. Today we revisit his theories in light of the current state of digital media, in an era of globalized information and culture—with presentations by artists, writers, philosophers, art historians and scientists, as well as the complicity of McLuhan’s former assistant, the now internationally renowned Derrick de Kerckhove—in order to better understand McLuhan and measure his influence.

Marshall McLuhan’s two major works, The Gutenberg Galaxy and Understanding Media, are respectively subtitled The Making of Typographic Man and The Extensions of Man. Technology, or media, are thus augmentations or substitutions of our natural organs, external extensions. According to McLuhan, in the 20th century our central nervous system was extended to the scale of the planet. Contracted by electricity, our globe is nothing more than a village, he writes. The age of electricity, energy capable of transporting information instantly, constitutes the major change for humans, and consequently, for the organization of societies. Globalization and immediacy are the new paradigms of space and time ever since the age of electricity, followed by electronics, computers (and today digital media), along with an essential awareness of the whole Earth. 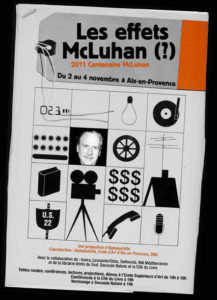 Technical determinism, conditioning and even subordination to the effects of technology, of the typographic man in the age of electricity… McLuhan’s analyses culminate in this sentence: The medium is the message, not the content. Information is what the medium produces as physical and technical material. Content is of another nature, is always another medium. Together, medium and message form a technical and cultural space. At a time when communication studies were dominated by semiology and science, McLuhan the Canadian proposed another methodology. From a background in literature followed by engineering studies, McLuhan’s way of thinking is still under debate, or even wholly denied.

It’s not ideas and concepts that are affected by technology; it’s the relationships between the senses and models of perception that technology changes little by little and without meeting the least resistance. McLuhan focuses on the changes and reversals that take place inside our brains, while making more literary and artistic references to exemplify and support his claims. Each new technological medium influences our senses, our psyche, both within the individual and within society; it’s the whole system that is upset. At a time of global awareness—and of a technologically simulated conscience—the effects of media infiltrate our physical and mental organs, acting upon our movements, our minds and their cognitive modalities. On a planetary scale, considering and blotting the effects of new technologies becomes urgent. To understand media, a certain critical distance is necessary, and McLuhan believed that artists are able to perceive and represent alternative meanings as well as reappropriate the sensory dimension of these new cultural models.

The history of human culture knows no example of diverse elements of private and social life consciously adapting to new extensions, if not the attempts of artists. The artist gets the message of the cultural and technological challenge several decades before its transformative shock is felt. According to McLuhan, art, like science and technology, is ahead of its time, and as these last two are organized in modern societies, artists are essential to the orientation, analysis and comprehension of lifeforms and structures created by technology. Associating artists with the future prospects of civilization is the cultural challenge that McLuhan poses, with as much enthusiasm as clarity on their status. He was already elaborating the fundamental relationships between art and experimentation, artistic and scientific research, artwork and society. In any case, experimental art informs people precisely how their own technologies will assault their minds, and only the artist is the man of global clarity.

Colette Tron is an author and critic. Through Alphabetville, she develops a space for multidisciplinary thought around the relationships between art, technology and culture, with the aim of articulating practices and theories of art and culture. Info: www.alphabetville.org/rubrique.php3?id_rubrique=33 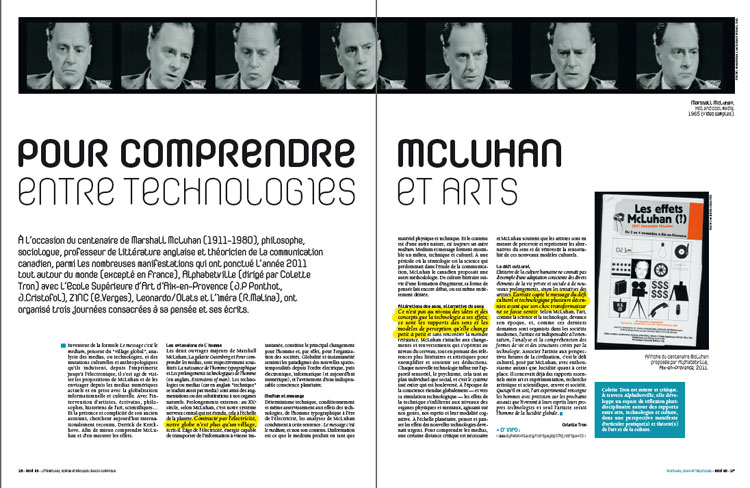