In 1993, a trendy neighborhood of newly reunited ex-East Berlin gave rise to Knochen Bank and its currency, the knochengeld (“bone money”). The highly mediatized artistic experiment lasted only seven weeks, but was one of the first to introduce an ultra-local alternative currency that challenged the role of money in society.

Nils Chlupka walks across his cobblestoned courtyard in a village situated in the far east of Brandenburg. He is surrounded by barns and an old farm, old motorcycles are parked here and there, tomato plants are growing peacefully. Chlupka’s hair is gray and short, his shirtsleeves are rolled up, he wears faded jeans, he has a heavy Berlin accent. Is this the image of a banker? Not quite. But we’re no closer when we try to imagine him in a suit and tie. And yet, this man was indeed a banker in the past, even the director of a bank. That was 21 years ago. Nils Chlupka was the head of Knochenbank (“bone bank”). It existed for exactly seven weeks.

As the director of Knochenbank, from November 10 to December 29, 1993, he administered the alternative payment method “Knochengeld” (“bone money”), which circulated in the Prenzlauer Berg district of Berlin. 5,400 “Knochen” bills, designed by 54 artists, circulated among about 30 bars, galleries and shops in the neighborhood bordered by Oderberger Straße and Marienburger Straße. It was an authentic method of payment, exchangeable for Deutsche Mark (DM).

This extraordinary artistic action was extremely successful. The currency was welcomed with open arms, as people bought out the bank’s almost entire stock of the bills. All expenses related to manufacturing the bills were reimbursed, all the artists received “real” DM, it was covered by all the media, even the “real” world of finance and the museums were interested in the action, which in this form could only exist in this very special place. 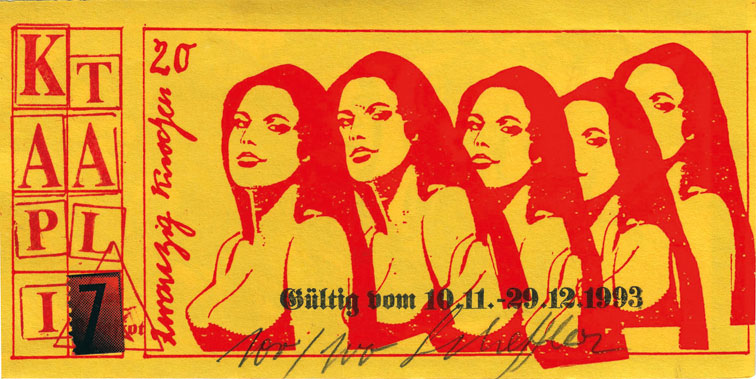 Berlin-Prenzlauer Berg in the 1990s was characterized by the dilapidated charm of non-renovated apartment buildings in East Berlin, with spectacular apartments that costed almost nothing. It was the perfect breeding ground for young creatives. Some were already there, others came from all over the world. People met in illegal and legal bars, people opened bars, small shops, experimented in galleries. An atmosphere of renewal prevailed in an environment that was still marked by the failed system, which in turn inspired the cultural circles that flourished there.

Nils Chlupka was the founder and owner of «Kommandantur». It was one of the first bars that opened its doors in 1991 at the foot of the water tower located at the corner of Knaackstraße and Rykestraße. Chlupka grew up in former East Germany, and had just lived through his first currency change from the Ost-Mark to the Deutsche Mark. He was interested in the value and importance of money; he made his own bills for his own bar.

Wolfgang Krause, an artist from Dresde, founded the “o zwei” gallery on Oderberger Straße in 1991. He exhibited photos and paintings, and like almost everyone in the neighborhood, was prepared to make unconventional encounters. And so he invited Bert Papenfuß, who was interested in the value of money, to the gallery. The fourth person to join this alliance was C.H. Adam, a Swiss man “who had already used money for artistic purposes in his native country,” according to Chlupka.

What brought the four together was money, but not in the sense of vile Mammon, the biblical deity of material wealth or greed. They were interested in the role money plays in society. They gathered around the collective Ioë Bsaffot: “It’s slang for ‘fake papers’,” Chlupka explains; and they developed the concept of “Knochengeld”.

The term “Knochengeld” refers to an idea of Diogenes, who believed that money should smell bad and go bad, as that would prevent it from being stashed. The artists also referred to the financial theorist Silvio Gesell (1862-1930), inventor of “melting money”. He also wanted people to use money as a means of exchange and not be able to hoard it. He advanced that money is perishable—that its value “melts” over time. This type of liquid cash with a negative interest rate would be spent fast, which would boost the economy.

5,400 bills numbered by hand and signed

The founders of the collective based in Prenzlauer Berg had a solid network. They were quickly able to convince 30 owners of shops and galleries to help introduce the gestating alternative currency. Within one week, they found 54 artists to design the Knochen. The Knochen were made with various materials, conveyed all sorts of messages, and the graphic design of each one was different. Their only common factor was their size and their value. Each creation was printed in 100 copies. Each one of the 5,400 bills was numbered by hand and signed. Their validity was certified by an official stamp of the Ioë Bsaffot collective.

One bill was worth 20 Knochen, which corresponded to 20 DM. As it was designed to be spent, each week it lost one Knochen of its total value, i.e. one DM. So the Knochen that had not been spent ended up being worth nothing. In the collection points of the participating bars and galleries, each bill was stamped to certify that it had been circulated. Those who had not spent their Knochen could acquire tickets that were pasted onto the bills in order to renew their value.

“We even asked the central bank of Land if what we were doing was legal,” says Chlupka. “We learned that in fact it wasn’t legal, but that we could do it anyway, given that Knochen referred back to DM.” Besides, it was an artistic action for a limited time only.

A gallery transformed into a bank

The “o zwei” gallery became the bank. Bills could be withdrawn in exchange for Deustche Mark or exchanged for DM by the bar and gallery owners. From the start, the artistic action was a total success. “Art collectors and bourgeois came and almost tore the bundles out of our hands,” recalls Chlupka. Each bundle contained a sample of each 20 Knochen bill.

One bundle costed 1,050 DM. Those who could not afford it but who were “chasing” a particular Knochen spent the bills they acquired individually and bought new ones until they stumbled—or not—on the desired bill. There was no guarantee. But that didn’t matter, because “people spent their money in the neighborhood anyway, where they could pay for their beer with Knochen instead of DM, it didn’t cost anything more,” the director of the bank explains.

And so began the effective circulation of money. The alternative currency boosted and stimulated business. After seven weeks, it was over. During the auction organized for the closure, the German Museum of History and financial institutes such as the Deutsche Bank were buyers, recalls Chlupka: “Knochen became more and more expensive as art objects.”

On his farm in the countryside, he contemplates a few Knochengeld bills 21 years later. In Prenzlauer Berg, he can no longer use them to pay, as this money has no value there. Such is not the case in the art world, where their negative value has been replaced by a positive that is determined by the art market. One bundle that Chlupka followed on eBay reached the sum of 5,000 euros—and that was two years ago. Blessed is the one who has collected Knochen. For Knochengeld doesn’t smell either.

Stephanie Reisinger is a German journalist. Her themes are Scandinavia with focus on family policy and war Children and Local, she worked as a reporter in Berlin and Brandenburg. 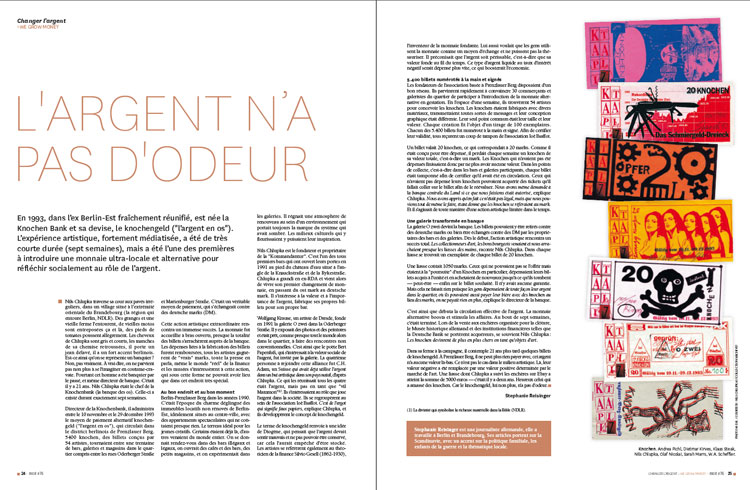