The Age Of Possibilities

Speed, hypnosis and suspense, inventory and encyclopedic classification, politics, are all utopic objects that can be reinvented through radio by words and sounds. A short history of these radiophonic, literary and poetic times.

Bologna Centrale is a film by Vincent Dieutre (2003), but also a soundtrack that resulted in a piece for France Culture’s Atelier de Création Radiophonique, broadcast on March 30, 2003. In it, the author states, confides, murmurs, or quite simply tells, in voiceover and in a renewed time-space, of his initiation to love and his discovery of drugs. The film ends with the Bologna train station attack on August 2, 1980, just as in the middle of this disaster it invites the narrator to embark on a new story, elegiac and evolving. As a fragment of a sound autobiography, the voice (the grain of the voice) is also an inverse mirror of the body that carries it, a labyrinth of mental images in which the audience gets lost; as close to the microphone as to a new skin, the recorded voice is another. Hence, one of the utopias of the radiophonic voice: it allows access to a dimension of space and time both melancholy and visionary.

Moreover, we would have to inventory all these possible utopias of radio as they are activated by voice, words, writing, in this case literature and poetry. The arborescence of the ever-expanding limits of the exploration of language-time and sound-time would first appear as the deep-rooted essence of their common adventure. And this arborescence would expose at least four figures of the utopia of time: real time and speed, hypnosis and suspense, inventory and encyclopedic classification, political time.

Real time, as studied by Paul Virilio in L’Espace critique (1984), and speed, buoyed by media technology and the electricity of the medium, offer a first approach to a radiophonic time that finds its poetry and its esthetics in a perception apprehended like a succession of presents, of instantaneities, in fragmentary writing that is immediately explored by avant-garde literature (Jeu radiophonique n° 2 by Peter Handke, 1970). This same discontinuity of language between word-signal and sign-sound was in the 1960s what William Burroughs and Brion Gysin made the salt of their cut-up: the spatial and hallucinatory expression of the sound (and plastic) part of words.

Conversely, in counterpoint to this fragmented approach of language made into sounds, there is a radiophonic time that uses this language to generate a suspended, hypnotic, contemplative state of listening, which intercrosses sounds and words in a bubble of ether, as in the short story by Victor Segalen, Dans un monde sonore (1907). In this text, the narrator is invited to the home of a couple whom he remarks are separated by the senses—the woman expresses herself through visible phenomena, while the man communicates with the world by sounds. This modern and atypical version of the Orpheus and Euridice myth should have been the libretto for an opera by Claude Debussy; instead it will endure as the hypnotic and timeless spell produced by a literature everted into the world of sound, perceived by listening, as it builds sonorous spaces. In this experience of poetic listening, sound has led time astray into the imagination.

Parallel to these esthetics and poetics of a time experimented through listening is the asymptote of accumulated, superimposed, stored time: archives of the 20th century, their voices fixed on tape, digital and immaterial media, their events, from the most ordinary to the most sophisticated. The time of the archives is a time compiled to produce a face of utopia which, in its attempt to be exhaustive, remains unreal. Theoretically, it remains the time of signs waiting to be inventoried, classified… In Tentative de description de choses vues au carrefour Mabillon le 19 mai 1978, the writer Georges Perec, from inside his mobile studio parked at this intersection of Saint-Germain-des-Prés in Paris, describes aloud, names, states, for more than six hours, the spectacle of the street, traffic, vehicles, passers-by… Inventory is at work in sound recording, as, on February 25, 1979, after being reduced to a little over two hours, this performance was broadcast on France Culture’s Atelier de Création Radiophonique. It was an attempt to convey the completeness of signs in one place, much like a Borgesian, universal sound library, whose poetry the media theorist Pierre Schaeffer has often placed above that of radiophonic time.

Finally, if the history of radio, more than that of other media (and television in particular), has spanned the 20th century so thoroughly, carrying along with it the history of artists and ideas, recording and broadcasting the sound pages of the world, it is not so much because it is memory, but because it has a memory. From Les Français parlent aux Français, a BBC radio show (Radio London, 1940-1944) that broadcasted messages to the Allies, to Radio Free Europe during the Cold War, radio has often been a weapon of resistance and combat. Of course, it has also been a chronology of dictatorships, propagandas and disinformation, but the fact remains that dissidence and resistance, fights for justice and uprisings of people have seen it as a clandestine, operative and loyal relay. From then on, a history of writers, poets and journalists for freedom has also been inscribed in the history of radio’s political sound, whose conversion from analogue to digital will be its new belt-drive. Thereafter, the virtual, visual and audio global network, made of a time at once derealized, epidermic and tactile, consequential and viral, will appear as the space of another utopia, the age of possibilities.

Alexandre Castant is a professor at École Nationale Supérieure d’Art in Bourges, where he teaches the esthetics and history of contemporary arts. As an essayist and art critic, he has published Planètes sonores, radiophonie, arts, cinéma (Monografik, coll. Écrits, 2007 – new enhanced edition, 2010), about creative sound work in the field of visual arts. Website: www.alexandrecastant.com 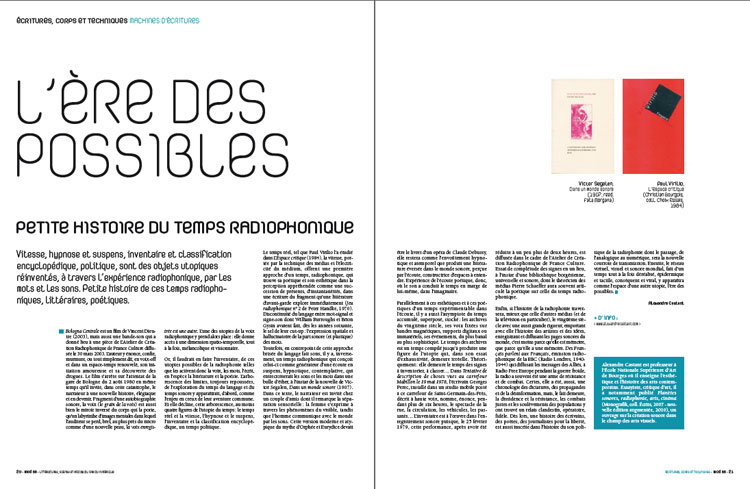