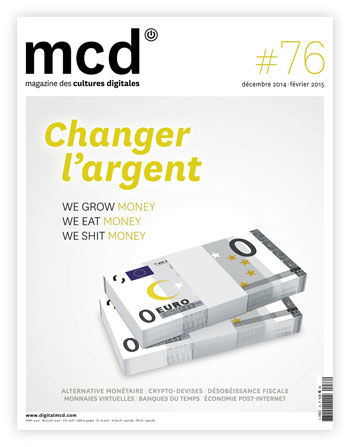 Our relationship with money is complex, to say the least… On this side of the Atlantic, we preserve an almost aristocratic modesty when it comes to talking about our income, whether we are employee or heir.

On the other hand, obeying the laws of attraction / repulsion, money is a powerful source of motivation and inspiration. Like sex (just as an example), there is no taboo regarding its artistic representation and interpretation. And the crisis—assuming that it is indeed a crisis and not a structural element of our economic model—seems to spark artists’ imagination.

As we can see from the panorama of initiatives collected by Shu Lea Cheang (guest editor for this issue), along with consulting from Annick Rivoire (poptronics.fr), money is no exception to the “great transformation” brought on by digital technology—dematerialization, networking, transparency, openness, etc.—the exact opposite of the verticality and opacity of financial structures that continue to collapse before our delighted eyes…

In the age of electronic transactions, accelerated cash flow and ubiquitous banking platforms, humans seem to be out of the loop of this infernal machine generating 2.0 crashes. In parallel, we are witnessing the emergence of the first virtual currencies. Not to say that this announces a new financial counter-utopia on a human scale.

As some of the contributors point out, we find, on the contrary, greed, speculation, exploitation… along with symbols that send us back to the stone age—the analogy between the goldmines and the “mining” of bitcoins is arresting. No doubt, these so-called virtual currencies will not give us the chance to renew with our nostalgic origins of trade and donation, the absolute antithesis of money.

And it is rather troubling to see how the esthetics of both the coins and “fake-bills” distributed by the artistic and political collectives resemble state currencies, recalling the great battle between libertarians and liberals… It is reassuring to know that both coastal brothers and night workers regularly tend to their encrypted piggy banks…

Nonetheless, the monetary alternatives suggested by artists and activists express dreams of economic emancipation, indicate other possible yet uncertain paths, symbolize the potential of new media technologies, and still force us to rethink current distribution networks. In this time of penury, both material and intellectual, it’s already a lot.

MCD gives special thanks to Shu Lea Cheang, Annick Rivoire and all the writers and translators who contributed to this issue.